“Here’s what new, apart from the now-veteran band returning without drummer Richard Jupp who has left after 25 years, probably with a gold snare drum.

Tempos sometimes are a tad brisker, atmospheres are a bit less cloistered, horizons are mostly clearer. The song K2 has a skip in its step and in its heart irrespective of some of the grittier elements described in the lyrics. Trust The Sun puts its faith in people not cities or environments and finds that a comfort.

Guy Garvey’s voice is still that of the ideal friend, the one who will forgive you all and understand it all and be there. It still feels imperfect in all the best ways.
The band still plays within a range that could be called mid-tempo to mid-mid tempo. And when choirs or strings arrive they feel like hugs not drugs. 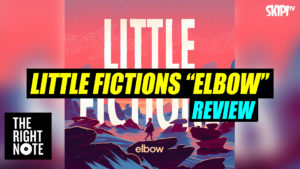 While the Elbow house may feel different, Little Fictions is not a relocation more a freshening renovation. For example, musically and lyrically the long, complex title track, doesn’t pretend the world has somehow become an Amalfi coast postcard. And Elbow still sing of missteps in love and life.

But you can use Little Fictions as an argument for careful optimism in the continuing presence of your fellow human. And in these Trumpian times that’s a hard argument to make but an admirable one to hold on to.”