The first single released from this album, Dead Alive, was a little misleading. The Shins’ frontman James Mercer knew what he was doing though when he released it. Rhythmically, it’s a throwback to the band’s first record, Oh, Inverted World, so it doesn’t alienate the group’s loyal fan base, the ones who were there before Garden State elevated them to mainstream status.

But Mercer is having fun with the production on this record.

On this, the band’s fifth album, he plays with arpeggiators and synths, and he adds strings from Nashville to the recordings he made at his home studio in Portland.

The track Painting a Hole is pretty abstract but the subject is meaningful, it relates to people’s beliefs, and it’s the closest thing to a political song on the record. 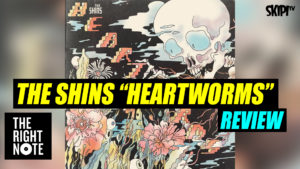 He changes tack completely on the track Mildenhall, proving this isn’t all abstract concepts. This poppy tune covers Mercer’s teenage years living in England finding himself through music, and discovering The Jesus and Mary Chain.

But hold on for the mariachi band that seems to appear on The Fear with the addition of horns and some interesting percussion.

I admire how throughout the album, he makes use of the production tools at hand in a melodic, harmonic and downright tuneful way which reminded me of Brian Wilson’s experimentation in the making of Pet Sounds.

I’m not saying Heartworms is in quite the same league but it’s an album that takes chances, while keeping a foot in the familiar, and I like how strangely comforting that can be.

“The Real Ice Road Truckers Are In The Video”