At some point after the release of Holy Holy’s 2015 debut ‘When the Storms Would Come’, a trusted confidante told guitarist Oscar Dawson that they’d made an album that really wasn’t in keeping with the times.

Rather than take that as a compliment, Dawson was horrified: Are we that daggy, he thought to himself.

The answer was no: ‘When the Storms Would Come’ was one of the strongest debut albums from an Australian artist in recent memory. But that comment may have played a small part in determining the way he and singer/guitarist Tim Carroll approached their second album: all the rules were out, and it was time to explore their songwriting. 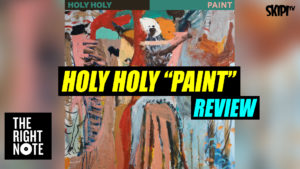 Paint works so well because Dawson and Carroll have managed to embellish Holy Holy’s sound, while not losing the elements that made their debut so compelling. Carroll’s sleepy vocals remain a beautiful foil for Dawson’s expressive guitar work, and their autumnal sense of melody is present and strong throughout.

There are some surprises though. Progressive rock isn’t something you’d normally have associated with Holy Holy, but there they are on album closer Send My Regards, wigging out like mid-70s Genesis. True Lovers, meanwhile, is an 80s-styled synth powered gem; while opener That Message skitters to life with an R&B influenced beat.

The key to all this is Dawson and Carroll’s vision for Holy Holy. They know when to push the boundaries, and when to leave well enough alone. It’s why they’ve been able to forge new ground here, without losing sight of who they are. And that’s a rare feat.

“Stand Me Tall & Proud Until You Let Me Down Again”