KING GIZZARD AND THE LIZARD WIZARD

Oh My God. This is exactly what the Professor – clearly the best source for any information on hallucinogenics – described in that episode of Gilligan’s Island where Maryann took some, ahem, “poisonous” mushrooms.

But man if this is mushrooms, I’m ordering myself a container load of shiitake or morels, or, whatever it is they’re boiling up at main Gizzarder Stu Mackenzie’s place.

What Flying Microtonal Banana has is a fair bit of everything. Which is what makes it so entertaining.

Open Water has a power charge, a funky backbeat, a snaking guitar line, the smell of brine, overlays of both early Pink Floyd and peak years Stone Roses, the strong suggestion of bagpipes, and seven minutes in which to say it all.

Rattlesnake doesn’t try for half that complexity. Instead it sits on a Hume Highway rhythm for its seven minutes, says little more than “rattlesnake” and gets you into a kind of microtonal trance. 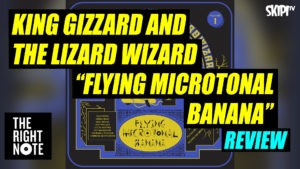 By contrast, Nuclear Fusion slows down, thickens and takes a semi-dozy, psych-folk route as much Pentangle as anything coming out of Perth. Then there’s the potential space rock of Melting that finds instead a jazzy subset.

And I haven’t mentioned the freak scene of Doom City, which switches back and forth between Italian horror movie soundtrack and London’s underground “happenings”, or the title track which takes up some Indian tones, instruments and, probably, a salwar kameez.

The songwriting may sometimes seem more like door opening and making room for whatever comes out next, but I suspect there’s actually a fair bit of thought gone into the door, the room on the other side and the space set up for whatever comes.

Now, sit right down and you’ll hear a tale, a tale of a fateful trip …..

Larkin Poe: “Our Job Is To Put A Fresh Spin On Things”