‘After Hours, Close To Dawn’

You remember Kingswood. Four rockers from Melbourne with guitars set to stun, whose 70s-inspired classic rock sent their 2014 debut, Microscopic Wars, sailing to Number 6 on the ARIA charts.

If After Hours, Close To Dawn is any indication, that Kingswood is dead.

Opener Looking For Love sets the tone. It’s a piano ballad that sounds like a lounge act covering The Band via Sgt Peppers-era Beatles, and is so out of keeping with what you’d expect from Kingswood that you may find yourself checking whatever listening device you’re using to make sure you’ve got the right album. And that’s before you even get to the clarinet solo on Big City.

Looking For Love is not the exception, though, it’s the rule for a record that’s light on distortion and heavy on mood-driven blues and pop. And for a good part of the record, Kingswood pull it off: once you’ve got your head around their new approach, it’s hard to deny the drama and hooks of Library Books, Rebel Babe and Creepin. 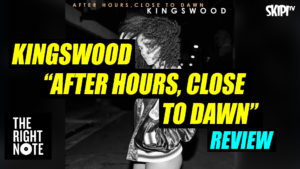 But there are too many moments where Kingswood don’t sound anywhere near as sure of themselves as they’d like us to think. The production feels tentative rather than assured; Like Your Mother is a cringe-worthy throwback to their past, albeit without the bombast; and Atmosphere is indicative of an album where a number of the songs seem to meander rather than strike.

In some ways it feels like Kingswood have tried to make the kind of sonic leap to maturity that Arctic Monkeys managed with their A.M. album. And while experimentation and a desire to change must always be encouraged, on this occasion Kingswood haven’t quite pulled it off.

“You have something which is bigger and better than the Olympics”