My fingernails were being bitten down to the quick, by my teeth, because the young German soldier’s fingers were jittering. I was watching the Danish entry for Best Foreign Language Film at this year’s Oscars, Land Of Mine, and it was a white-knuckle ride.

Here’s the context for the story: at the end of World War 2, about two million land mines littered the Danish coast. The Germans, occupants of that small nation for nearly the entire war, figured the allies would storm the beaches, try and take it back. That didn’t happen. When the war ended, as part of the reparations treaty, Germany had to supply soldiers to Denmark to find, diffuse and dispose of all those land mines buried in the sand. They sent, effectively, 2,000 boys – the youngest possible soldiers, sixteen year olds with wispy whiskers and baby faces. The land mines, of course, were live and lethal. Boys blew up. 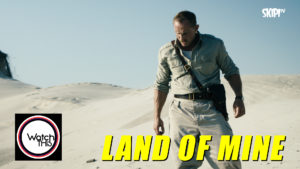 In terms of tension and suspense, who could possibly imagine a better set-up? Writer / director Martin Zandvliet, however, gives us much more than a bloody horrorshow. By focusing on the growing relationship between Danish Sgt. Carl Rasmussen (Roland Møller) and his squad of 14 young Germans tasked with clearing one particular beach over three months, Zandvliet forensically examines issues of vengeance, forgiveness, compassion and humanity – specifically, how different we really are, and how different we are willing to believe we are. Pretty relevant stuff for 2017, no?

We first see Rasmussen beating a German soldier as he walks out of Denmark with his colleagues. The German was trying to leave with a Danish flag, and the burley, very manly Rasmussen is livid. “This is my country!” he screams as he rains down blows. “Not yours! You are not welcome here!” And, despite his brutality, who can blame him? These were his oppressors, his home-invaders, the savage barbarian destroyers of his entire world – and everything was unequivocally their fault. Why shouldn’t they take a beating?

But should they get blown up on the beach? Well, why not? They bloody well put the bombs there in the first place, didn’t they? These are the moral, ethical and deeply humanistic value questions at play. Rasmussen – assumedly single and childless, living on a beachside farm with his dog – is a tough nut, but these are boys under his charge, and they’re getting their arms blown off. Is compassion inevitable, or are the wounds of the world’s worst crime impossible to bandage?

Møller is spectacular in the role of Rasmussen. His physique, his thin moustache, the way he wears his khaki uniform and his prominent insignias, the way he tends to the fist he injured beating the German at the film’s beginning, all point to a career soldier who still mostly has his shit together even as the world has gone insane – mostly. His character arc across the film is beautifully structured and he modulates it precisely and unsentimentally (as you imagine Rasmussen himself would). Møller got out of prison in 2002 after spending four and a half years inside for ten assault convictions; until now, he has almost exclusively played hard-core criminals, as he himself was. He justly won Denmark’s highest acting honour last year for his portrayal of Rasmussen.

The filmmakers shot at some of the actual beaches involved, and, during production, found a real mine. How perfect, and perfectly sad.

‘Ghost In The Shell’ Review

Should The NRL Cough Up?