It may be a bit late to do this but if Spoon were Australians I’d be suggesting a name change to Splayd, or I guess, spork.

Hot Thoughts, confirms them as the kind of all-in-one utensil which serves all your needs. There’s pop and art rock, funk and indie rock, on-point scenesters and knowing veteran rock.

And for one glorious/ridiculous/shameless moment a direct reincarnation of Kiss – specifically I Was Made For Loving You.

The song Shotgun begins so clearly in the shape of that disco rock, ahem, classic, it’s a shock when instead of Paul Stanley wanting sex you get Britt Daniel getting aggravated. 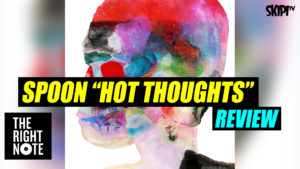 By this stage of the album – Shotgun is the penultimate track – it kind of makes perfect sense that it is followed by something which might have come from the second side of David Bowie’s Low.

The instrumental, moody, jazz-meets-Berlin-on-a-post-drugs-recovery Us spends its time throwing saxophones and horns into the night sky like spotlights, and the album ends so cryptically it’s hard to remember that 42 minutes earlier it had begun with the title track’s choppy little funk groove that tugged at the hips.

Often enough just when you think Hot Thoughts is going all out to dance or to disturb, it deviates: from agitated post-punk to Orbital-like trance, from ‘80s white boy funk to ‘90s indie rock vagueness.

If there is a fault here for Spoon it is that as interesting as all these moves are, not a lot engages the heart as well as the brain.

Still, even a Splayd can’t do everything: that’s why you’ve got a full cutlery drawer and CD shelves.

“I Think I Had Survivors Guilt”

“I Wanted This Record To Have A Sharper Edge To It”