The fourth album from Sydney duo producer Adit and rapper MC Solo is a self-described “mature” album. Its themes turning to the kind of life choices you have to make when choices mean more than whether to stay for the next drink or toke and do you crash here or somewhere else.

So, you know, serious stuff. How serious? Well the album title is taken from the original name of the Tibetan Book Of The Dead – popular source material in western music of course since John Lennon sang ‘I know what it’s like to be dead’.

But let’s put him aside and check out Adit because Bardo State is a 64 minute advertisement for his maturity. 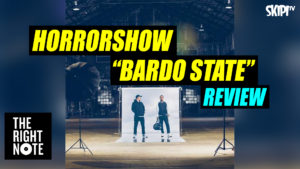 There’s expected space and echoey moments in Astray and the claustrophobic Ceiling Fan, but take note of the rich tones he’s given Solo’s voice in How We Get Down while some New York disco sneaks in in the background, or the pop richness of Never Say Never, where I swear there’s actual twinkling.

Then there’s After Dark, where Hayley Mary of the Jezabels offers a sweet chorus with a slow suggestion of tension in the airy background that shifts focus about two minutes in when everything else drops out but that echo chamber.

It’s immediately sharpened and tension is high without any need to crank up it up artificially, and though the song soon switches back into its prettier mode, the point has been made and colours the song thereafter.

Maturity comes in more ways than advice on living, take downs of conservative wingnuts and a recognition that the heart wants what the heart wants. Thanks to Adit, Horrorshow cover those bases and more with Bardo State.

“The Aussie Presence In The U.S.A Is Really Growing”