So, Semper Femina, always woman? Well yes, but with a sting, for the words come from a longer, famous and more questionable phrase, which translates as woman is ever a fickle and changeable thing.

Which is of course a phrase from a man’s gaze, defining by absence of understanding or imposition of belief. Basically, it’s the punchline of many a smoky men’s club comedian to a bunch of blokes: women, eh? I know, right. Who can tell?

Here’s the rub though, Semper Femina, does not seek nor reflect the male gaze or the male assumption; in fact, it doesn’t include men at all. Instead it addresses friendship, love and connection, desire, need and anger, by a woman who admires and respects, and who herself has questions.

To tell these stories, Marling continues her travels on the borderlines of music, finding routes through folk, pop, rock and something like adult soul.

There’s nothing in the world at the moment quite as sensuous as the slow breathing bass of Wild Fire, with its little exploratory guitar lines and the loose echo on the drums.

Well, nothing except maybe the slinking, viscous shape of Soothing that entwines with you like a leg thrown over your exhausted, sweat-tipped body as Marling’s voice stands on the line between tense and trembling. 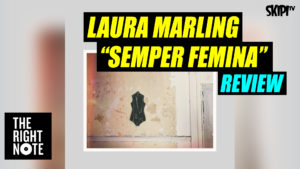 Semper Femina also has psych folk in the manner of Linda Perhacs, some pretty-as pop which matches Norah Jones, Texas-style electric guitar over a slow shuffle and several tracks which draw from her longstanding interest in the intimate, gently deployed manner of Nick Drake.

Most of all though, whether her voice is set inside your head, and so warm it could reheat Scott Morrison’s heart, or her melody is twisting the straightforward, Laura Marling has you on a journey of your own, man or woman.

The Dr Interviews The Jezabels

“Wish You Wouldn’t Wish Upon A Shooting Star”

“The Heartbreak’s Even More Intense”

“It All Started After I Hosted A Radio Show In Tamworth”