There are moments as a music fan where you have your breath taken away by what you’re hearing. Those occasions are rare, but that’s what makes them special. Hearing the opening line of Nadia Reid’s second album was, for me, one such moment.

It’s wasn’t her words – although opening with the line, “Have I stayed with you longer than I had to…”, is a pretty good way to start an album – but it was the purity of her voice, accompanied by nothing more than a stark, electric guitar. 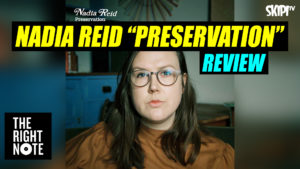 Don’t let the word purity fool you, though. There is nothing pure about the lyric, “There were two little words that I used, one was fuck, the other was you”, but there is defiance in the heartbreak that runs throughout this album.

Musically, this is largely quiet, melancholy stuff, perfect for a gloomy Sunday morning. The alt-country elements of Reid’s 2015 debut have been downplayed slightly in favour of mood and atmosphere, beautifully so on haunting single The Arrow and the Aim. There are some exceptions – Right On Time sounds like a rougher, indie-rock Fleetwood Mac – but closing track Ain’t Got You perhaps sums up the style and longing mood of the album in one line: “I’m a good woman, but I ain’t got you.”

Kasabian “For Crying Out Loud” Review